Patricia has been asked to give a presentation to the
Rotary Club of Southpoint (Jacksonville, FL) on the History of NLAPW
August 7th, 2019, 12:15 PM
Terra Gaucha Brazillian Steakhouse
4483 Southside Blvd, Jacksonville, FL

Patricia was interviewed by
Dr. Janet Smith Warfield on her blog
“Dancing with Words, Dancing with Wisdom”
now available as program #42.

“On behalf of the
International Association of Top Professionals
we would like to congratulate you on not only your nomination to be a member with us but for also being selected as our
Top Author of the Year for 2016-2017!
You were nominated by a current honored member with us and were chosen by
our panel based on your achievements,
education and contribution to the industry.”

Patricia is honored by this well written article
on her life and her legacy through her writing, her art, and her love of horses.
Download the article published in the
Haymarket Lifestyle Magazine here.

The 4th edition of Patricia’s book
Myth, Magic and Metqphor
was recently reviewed by
la Joie magazine in their Winter issue
who called it outstanding.
See Reviews 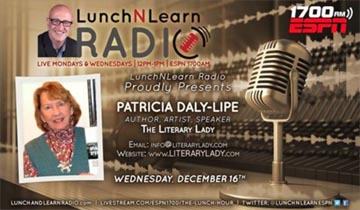 Patricia appeared on LUNCH & LEARN a radio program in San Diego, CA. Her interview may be heard here.

November 7, 2015
Patricia has been asked to sell her books at the
HUNT COUNTRY HARVEST BALL
Salamander Resort, Middleburg, VA,
Sponsored by Phillips Programs:
AUTHORS AND ARTISTS SHOWCASE WORKS FOR CHARITY

November 6, 2015
Patricia’s book
A Cruel Calm, Paris Between the Wars
was awarded Honerable mention in the
Southern California Book Festival

Patricia and all her books will be at the
Holiday Home & Craft Fair
Sunday, October 24, 10AM-4PM
Evergreen Firehouse, 6 miles north of Haymarket, VA US-15 toward Leesburg

Prospero’s is an independent bookstore selling used books, maps, and prints at the corner of West and Center Streets in Manassas, Virginia.  Their niche is Military History, with an emphasis on the Civil War, but they carry all genres.  As of right now, Prospero’s carries over 70 titles written by local authors.  So come visit this special book store in old town Manassas on September 19th from one to five and meet author Patricia Daly-Lipe. Patricia has written seven books, all different genres. Visit www.literarylady.com for more information about her books. There is bound to be a book for you!
Remember September 19th! Looking forward to meeting all of you,
Patricia, aka Literary Lady

Patricia will present her book,
PATRIOT PRIEST and her
personal perspective on history.

has just posted their exceptonal
review of Patricia’s book on
Helen Holt, Memoir of a Servant Leader.

Patricia will be giving a presentation
featuring her book
Helen Holt, Memoir of a Servant Leader
under the theme,
history from a personal perspective.

January 13, 2015
Patricia was been invited to present
Patriot Priest and historical writing
as part of the Washington Women Writers series.    The speaker program begins at noon. Lunch is served at 12:15 and at around 1:00 p.m., the president of the Club will welcome the attendees and give a very short rundown of upcoming events.  She then will introduce the introducer, who is chosen by the speaker in advance.  After talking no more than thirty to thirty-five minutes, there will be a Q&A, followed by book signing.

The Piedmont Journal of Poetry and Fiction

Patricia will be featured in an upcoming edition.

Patricia’s book
A Cruel Calm; Paris between the Wars
is the featured book on Beth’s Book Reviews
for December

Patricia’s book
A Cruel Calm; Paris between the Wars
has been selected by Little Studio Films
to be included in their AFM (American Film
Market, a major film convention) which will
be presented to international producers,
financiers and buyers. Part of the
recommendation is the wonderful review
she received from BonjourParis.

Patricia’s book
A CRUEL CALM; Paris Between the Wars
has been Registered by the
Writers Guild of America, East, Inc.

Association of the Oldest Inhabitants of D.C.
September 19th, 2014 @ 11:45 AM
Patricia will present”William Hemmick: Patriot Priest of WWI to the Vatican” based on her book PATRIOT PRIEST
at the Capitol Skyline Hotel
Reservations Required (202)342-1865

of July 7, 2014
has a feature article about
Patricia and her book A Cruel Calm

Thursday March 27, 2014
Patricia’s 4th radio interview
is about her books
Myth, Magic and Metaphor, Messages From Nature, All Alone and
La Jolla, A Celebration of its Past.
Listen Here

Patricia’s essay Journey into the Heart of Creativity which won the 2013 Virginia Writers Club Summer Short Story contest was published in the Spring 2014 issue of The Pen Women, the magazine of NLAPW

Tuesday March 4, 2014
Press release from Close-Up Talk Radio as listed in Ticker Report. Or directly from the website.

Tuesday 25 February, 2014
Haymarket author (“Patriot Priest”) Patricia Daly-Lipe’s audio interview with Tony Key on Artist First Radio is now online. Go to http://www.artistfirst.com/index.html and scroll down, right side to 2/25 and click on her name.
Or to listen now click here.

Goddess Fish Promotions is organizing a
Virtual Blast Tour of PATRIOT PRIEST,
The Story of Monsignor William A. Hemmick, The Vatican’s First American Canon.
See the posting from goddessfishpromotionsblogspot.com here.

April 26,2014
Patricia will be speaking at the 2014 Maryland Writers Conference.  Her topics are “Personal Perspective: Fiction and Non-Fiction” and “Force your way into your Art for there you
will find its Secrets” (Beethoven).

Sept 19, 2014
Patricia will be giving a power point presentation about her new book Patriot Priest for the Association of the Oldest Inhabitants of Washington (AOI) of which, as a 5th generation Washingtonian, she is a member.
The title is; “PATRIOT PRIEST; from Washington to Rome, from serving the
troops in WWI to becoming the first
American Canon of St. Peter’s in Rome,
the life of William A. Hemmick”

One of Patricia’s poems was accepted for publication
by Dagda Publishing.
It is titled “LES PIERRES DE LACOSTE”

A CRUEL CALM; Paris between the Wars
has won FIRST place in the 4th Annual Royal Dragonfly Book Contest Awards 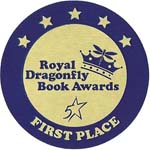 At the November 2013 meeting of Write by the Rails, Patricia was the speaker with “Journey to the Heart of Creativity” as the subject.

Patricia was asked to be a 2013 judge for the Golden Nib Awards in the category of nonfiction.

Patricia’s essay Immortality? Perhaps has been accepted for publication by The Literary Yard which describes itself as an e-journal that aims at identifying and featuring the best literary works awaiting publication.

The LOGO side of my buisness card is featured on the new website iFOGO Village whose website states, “We are a growing social network bringing readers and writers together.”

A YouTube Audio recording has been made about
the story of “Sweet William” in
Messages from Nature. the project
was created by Michael Mercurio.
The audio is best heard using Internet Explorer
or in Firefox right-click and Zoom.

Patricia’s short story Sailing Trip to Sint Maarten from Annapolis
from my book
Messages from Nature was published in the July 2013 issue of
“Messing Around in Boats.”

Patricia wrote an article about “The Very Thing, Haymarket’s Consignments” in the
GeorgeTowner, March 27, 2013 on page 16.

Patricia was named a finalist in the
Fiction Category
of the First Annual Fiction,
Poetry and Non-Fiction Contest by
“The Write Place At the Write Time.”

A Cruel Calm.
an interview by Carol Covin appeared
on her blog “New Grandmas”

To Paris and Back written by Donna Evers about Patricia’s mother and
A Cruel Calm: Paris Between the Wars
appeared in the Holiday 2012 issue of Washington Life .

Patricia was asked to review the LOST PRINCE by Shelden Edwards. Read the Review

MESSAGES FROM NATURE RECEIVED A 5-STAR HONOR FROM READERS FAVORITE, BOOK REVIEWS AND AWARD CONTEST.
GO TO REVIEWS PAGE TO READ IT.

Patricia had her poem, “Meant to Be: An Analogy” in Women’s Voices of the 21st Century: Experiences That Shape Women”, published by the Greenwich Pen Women. Additionally, prolific Patricia had a short story “The Talisman” from her book Messages from Nature, published in the July issue of Messing Around in Boats.

NORTHERN VIRGINIA WRITERS CHAPTER
The Northern Virginia Writers Club celebrated its 2011
achievements with a retreat at the Haymarket home of
Patricia Daly-Lipe on December 10. President Collier reviewed highlights of 2011 chapter meetings.
Patricia Daly-Lipe in will be guest speaker in July.

Patricia’s poem “A Poetic Meditation” is the featured poem
for the week of Jan 13, 2012 along with her books
and can be found on the National NLAPW website:
http://www.nlapw.org/nlapw-letter-gallery/

On this earth, there is oneness.
A rhythmic flow, a great symphony that is life.
Trees with roots, stems and leaves
Shells, fins, furs and wings, all living things.
Each has a purpose and to each, an end
And then . . .a new beginning.
Let us recapture the imagination of a child
See once more the mystery, beauty and joy of God
Playing within and behind, beyond and above.
Unite with the intimacy of commitment.
Trust takes time
But the gift is there . . .waiting.
Patricia Daly-Lipe

Patricia portrayed “Beta” aka Melinda in The Turing Test
a play by Conrad Geller presented on
Channel 10 (Fairfax, Virginia).
The play was taped and the performance
was shown on 15 different dates.

August 6th, 2011: “It is with great honor that I was selected to be a main speaker at the Virginia Writers Club “Your Writing Life, A Symposium for Writers of All Ages & All Stages” at Piedmont Virginia Community College, charlottesville, VA based on my book “Myth, Magic and Metaphor—A Journey into the Heart of Creativity.”

March 23, 2011: Presentation of A World of Women program for the National League of American Pen Women and and the AAUW. La Jolla Library, La Jolla, CA<

Januray-February, 2010:: Radio interviews on stations in Boston, Ocala, Baltimore, Sacramento, Colorado Springs and Atlanta pertaining to horses and her book, strong>Messages from Nature.