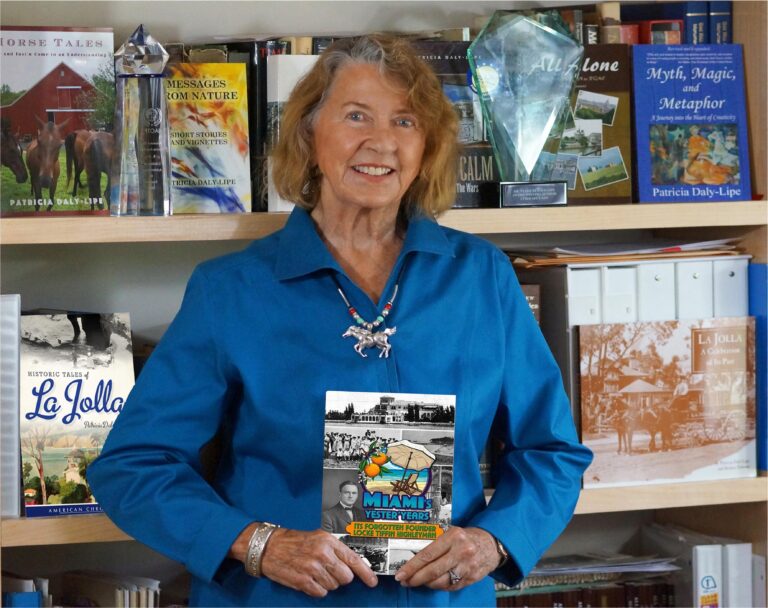 This is a photo taken in my library surrounded by the 10 books I have written, I am holding my latest. Also in this photo are two trophies I received from IAOTP. One is for lifetime achievement and success 2017. The other was presented to me for author of the year 2016.

Literary Lady, Dr. Patricia Daly-Lipe, is an Author, Artist and Speaker. Patricia has written ten books:  MIAMI’S YESTER’ YEARS, Its Forgotten Founder Locke Tiffin Highleyman;   NATURE’S WISDOM (a collection of short stories about animals, the high seas, and nature);   A CRUEL CALM, Paris Between the Wars (historical fiction);   MYTH MAGIC AND METAPHOR, A Journey into the Heart of Creativity;   ALL ALONE, Washington to Rome; LA JOLLA, A Celebration of Its Past;   HISTORIC TALES OF LA JOLLA;   PATRIOT PRIEST, A Personal Perspective of History from WWI, WWII to the Vatican; HELEN HOLT, Memoir of a Servant Leader; and HORSE TALES, Teddy and Just’n Come to an Understanding.

The La Jolla book was the Winner of the San Diego Books Awards in 2002. A Cruel Calm, the USABookNews.com Finalist Award, 2013 won First Prize for historical fiction Royal Dragonfly Book Award. Named ‘Author of the Year 2016-2017’ by IAOTP (International Association of Top Professionals) and ‘Lifetime of Achievement and Success’ in 2017.

Patricia is the past President of the National League of American Pen Women-La Jolla Branch and later President of the Washington, DC Branch. In 2007, Patricia was speaker for the National Capital District 36 Toastmasters 2007 Spring Conference. Her presentation was titled ‘The Power of Words’. The Special Achievement Award was presented to Patricia Daly-Lipe for participation in the 2009 “Golden Nib” Contest and an award of second place in poetry for “A Poetic Meditation”.

Patricia has written for the Evening Star Newspaper in Washington, DC, the Beach and Bay Press including La Jolla Village News in California, and The Georgetowner and Uptowner Newspapers in Washington, DC as well as several magazines across the country.

Her presentations have covered all aspects of writing for literary groups as well as colleges and universities.

In her “spare” time, Patricia has been rescuing thoroughbred horses. In the late ’70s and ’80s, she raised, raced and showed them.

For additional information on me and my life please go to my personal website. 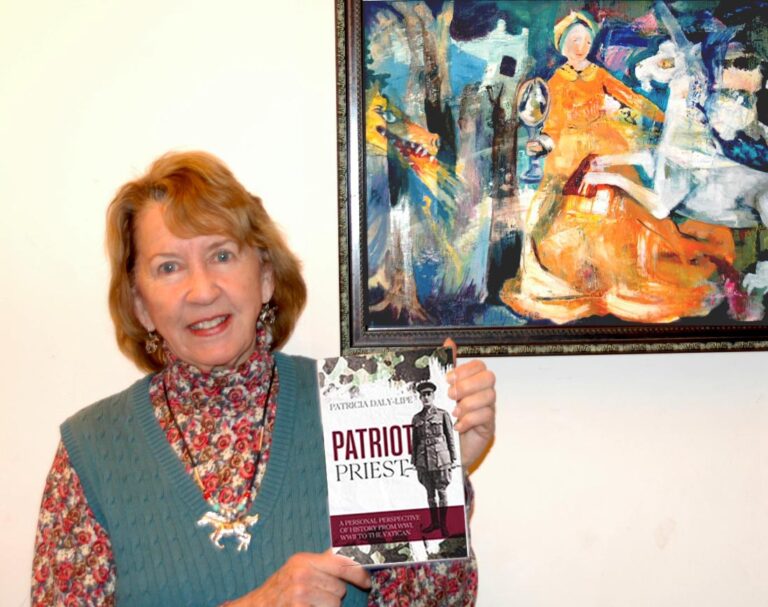